ok.. I know this is insane... 2 movies with the same month? yeah, yeah.. I know... anyways - I had been toying with an idea for some time. Combining two of my favorite things - fast food and sex, I'm loving it! So add to that that there are various people calling me "Mac" and the idea for an alternative McDonalds commercial rezzed in my mind... so I quickly gathered some people who wanted to help me out and actually produced a movie within a week... like I said.. insane.. anyways - please enjoy! another VIE production:

Ahh screw it... it's not nearly as good as an orgasm but it's still an freakin amazing feeling. Rendering ready - did I get all the shots right? Is the sound ok? Is it smooth, not a slideshow? and then, when you have checked it all... uploading - and again checking everything - even tho it's already out there.. everyone can see... no typos in the credits? ah well... to late anyways. Enough bullshit - here it is, finally - my 4th Second Life adult short machinima - VIE presents:


What started out as just another portfolioshoot with dirty debutant Moya Moyet quickly turned into a very hot short adult movie starring the sexy Dani and newcummer Lexie Starfall who were joined by Quasar Howley to complete the cast for this movie about faith, religion and a priest who gets to experience the only true miracle of life ;-)
Posted by Unknown at 12:05 PM No comments:

The Duet - by Skylar Smythe


The Duet
written by Skylar Smythe
(read by Skylar and Thorgal)

(I'm not very pleased with the reading of the first story I did... so I think I'm going to re-record that before putting it up here)
Posted by Unknown at 12:08 PM No comments:

Will Viewer 1.x codebase be blocked? 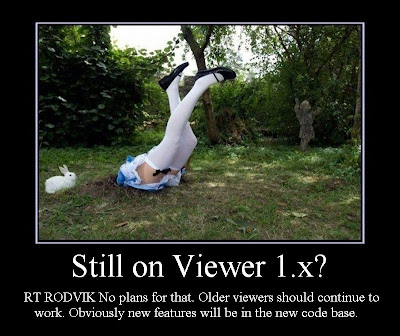 On Twitter @adamburp asked Rod Humble "Hey rod, can you squash the rumour viewer 1 2b blocked?"... and Rod did exactly that... (thanx to @_LeonieGSmith for pointing me to the original picture...)
Posted by Unknown at 5:44 AM No comments:

Yay! Bragging rights... Rod Humble replied to my twitter and reads my blog... and despite all the other content on here he even (on twitter @rodvik) admitted he did (I hope it wont get him in trouble)

"@mcgillivary @oobscure @darianknight Good post. I would say just social is not for us. It has to be social+creativity or shared creativity."

I do understand that real shared creativity crossing several virtual world's has lots of complicated aspects... technical challenges, copyright issues and intellectual ownership stuff, games of power between disgruntled people and of course (not the least important) some commercial aspects. Linden Labs is a company in business for making money after all, let us not forget that. 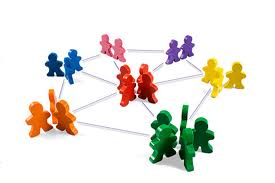 But just think -  we have a concrete, realistic chance here to start connecting over the different grids without needing to touch (almost) any of these touchy subjects. Please find, work with and integrate an independent social network into the second life universe and share the way you did that with 3rd pary viewers and other VW's.
It would allow Second Life users to reach out and *grins* brag about their (shared) creative accomplishments to people outside of SL, whether that be people using other virtual worlds (who could then do the same with their cool stuff) or to people who still have to discover the wonders of shared creativity.
And without opening up that pesky cesspool of icky subjects we don’t really want to think about during the creative process I think this is it...
This is one of those opportunities to open up, reach out and leap forward!
Posted by Unknown at 1:38 AM No comments:

Ok.. so Facebook didnt want us, Avatar United didn't turn out quite the way we or they wanted and now it turns out the warm welcomed Google+ thinks we're not real...  I tried (sstt, still trying - dont tell anyone) Google+ and I like it a lot - if it turns out they dont want me, hey.. it is their loss. But the past week while reading several blogs and a snowstorm of tweets on this subject I noticed two things which I found very interesting.

First, Second Life users or identities do seem to have a real need for social networking outside of the options supplied in Second Life itself (which are, I agree, practically non-existing at the moment).

Second, there are a lot of people out there who would rather invest a lot of negative energy into a rant trying to convince the whole world their toy sucks instead of  getting of their high horse and invest some energy in looking for something that does work. I'm not going to adress this second issue in this blog - but it surprises me everytime (wether the rant is about Second Life is dying, Viewer 2, Google+ or the SL pornstar community). Maybe I am naief and have to much of a Disney mindset - but personally I rather spend my energy on positive things.

The need for a social network is something that has been noticed by Linden Labs as well. They bought and dumped Avatar United in the past and their next attempt is currently in beta. Rod Humble (the big guy at LL, @rodvik) put his intentions out in the open using Twitter:


"Oh yeah. But I have no intention of trying to change googles or FB's mind. I would rather provide the service ourselves :)"

And given the negative sentiments surrounding Google+ and avatar identities at the moment this might just very well be the right time for Linden Labs to launch this thing - and I have to admit, I do like what they have been developing and improving the past months on the viewer and stuff so this might all turn out fine and may even be accepted by the majority of the second life users. Linden Labs is however, in my humble opinion, missing an opportunity to make a nice leap forward where interoperability in Virtual Worlds is concerned.

First of all.. I strongly believe Linden Labs should not be building their own social network software. It's not what they are good at and god knows communication has never been their strong point. There are however good alternatives out there - and it would be a way better idea (again my humble opinion) to try and integrate or interface such an altrnative into their viewer. Will Burns (@darianknight) suggested Daispora; an open source, privacy focussed solution which looks promising indeed. And surely there are others out there...

I really think a Second Life based social network is going to fail (but I'm happy to be proved wrong on this). I just dont think it would add enough value for users, it's never gonna be as good as the cool kids out there and it will not bring many new users in for Linden Labs either cause it would not reach outside of Second Life.

But think about this for a moment: integrating an existing solution would make it possible to socialize with other people (either virtual and physical) outside of Second Life. Other VW's might even (since the code is open-sourced) adopt and improve upon the integration - users from all over the different grids sharing photo's, machinima, concurrent multi-grid events linked by this overall social network and possibly even group chats and (even more daring) video-chatting independant of the grid or rl location the user choose to exist on...

Call me Disney minded... but I think that would be cool... now back to the coffee and poseballs...
Posted by Unknown at 6:25 AM No comments:

I had so much fun doing my Virtual Immaturity Show on FGRadio last sunday 12-2pm Sl time) - thanks to all that listened and/or dropped by my place during the show. Also a special thank you for Skylar and Suzan for being the first contributing (amazing ladies - follow them on Twitter: @Skylar_Smythe and @Suzaniac). Still lots of room for improvement though so, below Suzan's amazing photo, just some notes to myself Posted by Unknown at 5:51 AM No comments:

It's been a while since I last posted something on this blog. Last week the mosaic (which was mentioned on Emanuelle Jameson's excellent blog btw) and before that my promise of "Portfolio shoot 2" cumming soon... on that last bit, I did shoot some with 2 amazing ladies but I found the quality of the footage not good enough to use... does that mean there wont be any more adult movies from yours truly? Ofcourse not... the least I will do is completing the Dick Tasty trilogy - a new pc, some great ideas and the collecting of set material and props has started already.. naughty ideas popping into my head while in the shower, stuff like that - yes.. somewhere in 2011 there will be a Dick Tasty 3 but its a slow process.

For now? I'm busy and nervous about my new radioshow... it will air for the first time today from 12-2pm (second life time). It's gonna be a mess, it's gonna be fun, it's gonna be about great music, about all things second life and full with twitter bullshit... so make sure to tune in this afternoon and keep watching this space for updates...
Posted by Unknown at 2:12 AM No comments:

So who is Thorgal McGillivary dude anyways?

Well.. thanx to a nice little Fickr game this picture below tells you all... (click on the Flickr link to the side to find out more...)

Posted by Unknown at 6:47 AM No comments: 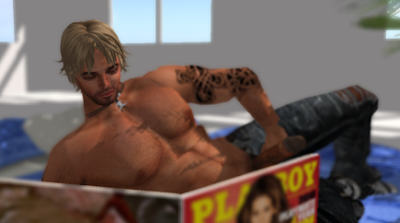 It took some time, and I know some people already started to wonder if there ever would be a part 2 to this great trilogy. But some things are just worth waiting for for... and while you're waiting for some of those you can waste time by watching this movie ;-) Many thanks go out to all the people involved, their patience, the sim owners who allowed me to film and some very creative people who helped making animation, props and scenery. Enough already, I need to get on writing my Oscar speech, filming a second portfolio shoot and preparing for Dick Tasty chapter 3. Yes, yes... one day there will be a chapter 3...
Posted by Unknown at 9:33 AM 1 comment: